Like so many of the superb, yet “under the radar” wineries I’ve come across in my career, Darms 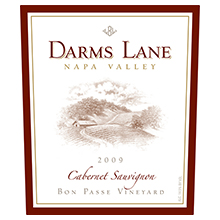 Lane was a complete mystery to me until a few weeks ago. But I was intrigued when hearing about some of the winery’s recent accomplishments, so I decided to do a little digging. What I’ve discovered will convince you (as it did me) that this serious family run venture in the Oak Knoll District of Napa should be added to your list of “must haves” for benchmark Cabernets.

My curiosity was initially piqued when discovering a track record of excellent to outstanding rankings in the press for Darms Lane’s proprietary Cabernet. Known as the “Bon Passe Vineyard”, this bottling comes from a vineyard originally planted in the 1970s, when it was owned by Gil Nickel – of Nickel & Nickel as well as Far Niente Wineries. But in a twist that runs consistent here at Darms Lane, “Bon Passe” – like so much of the acreage here at the estate – was originally a Chardonnay vineyard.

That’s right; Darms Lane – becoming increasingly well-known for blockbuster, 100% Cabernets and Petit Verdots – began life as a Chardonnay stronghold. If Darms Lane has yet to become a household name for many, perhaps more will recognize the historical winery Crichton Hall. And it was precisely that winery – once known for its sultry Chardonnays – which would eventually be renamed: Darms Lane.

Located on Darms Lane road – hence the obvious choice when the time came for renaming the estate – Crichton Hall was in need of replanting by the turn of the century. One of the company’s limited partners – Richard Bump (who would eventually buy out his other partners and become sole owner) stepped up to the challenge. Terroir studies indicated Cabernet and other Bordeaux varietals as being more suitable to the vineyard, so Richard set about replanting (and renaming). The rest, as they say is history.

Today, under the wine-making guidance of one of Napa’s most experienced Cabernet experts, Brian Mox – formerly with Lewis Cellars, Etude as well as Laird Family Estates – this beautiful property, nestled against the southern hills of the Mayacamas Mountains is quietly and consistently releasing one great vintage after another. As Steve Heimoff – California editor for Wine Enthusiast – explains:

“Darms Lane is one of those wineries that travels under the radar, but it really is worthy of your attention.”

And now that yours truly has experienced their classically structured, brilliantly balanced 2009, I couldn’t agree more!