Séverine Bourrier –
Queen of the Roussillon

If you could go back in time to the early 1990s, find yourself in Los Angeles as a frequent and very preferred diner at the über-hip restaurant, Campanile – co-owned and managed at the time by one Manfred Krankl – and be considered “in the know” enough to be part of the inner circle which Krankl and his good buddy winemaker John Alban ran with, well – would you? Because if did – if you could – you would be one of those very lucky few to have been on Krankl’s mailing list when he launched Sine Qua Non with all those freakishly incredible wines that didn’t cost near what they do today.

Krankl launched Sine Qua Non – SQN for those in the know – along with his wife Elaine and their buddy John Alban in 1994. Self-described as “project wines”, each bottling was geared towards the Rhone Ranger category, but there were no rules. They hit gold with Syrah. Syrah in their hands began landing them Parker scores of between 95 and 100 points. They were instantly unobtainable; sold exclusively via mailing list – a list so well managed and guarded that it has a 10 year waiting list.

The wines are unreal. They are about as perfect as anything you’ll ever drink. I once had an employee working for me who did an internship at SQN. He was a generous young man, so I have enjoyed a few of Krankl’s wild masterpieces. I’ve also had to rub my eyes in absolute disbelief when I see the prices the wines trade for at auction as well as on-line. The inaugural bottling from Krankl – his 1994 Syrah-based blend they named Queen of Spades – now trades for $6,000 a bottle.

Okay, so none of us can go back in time. We can, however, go back to the Mother land; the place where Syrah really struts its stuff. Yes, I’m talking about my beloved Roussillon. Home to more wines represented in the “let’s drink this tonight and really blow ‘em away” corner of my personal cellar, you are well aware of my time in this region and my discoveries along these schistous cliffs.

I have tasted what everyone is – or soon will be – calling “the SQN of the Roussillon”. In fact, that’s EXACTLY what Jeb (Wine Advocate) tells us. Known as Chateau de L’Ou, this is the home estate of Séverine Bourrier. Born in Africa, she trained in Bordeaux, working for the top estates of the Medoc before “catching the Syrah bug” (as she says) during her travels and eventual studies in the South. Syrah calls to her, it is her native varietal, and the magic she performs with this varietal directly mirrors what I have experienced in the wines from SQN, John Alban and the rest of the Cult masters. 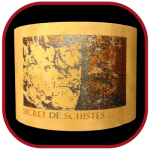 “SQN of the Roussillon”

I cannot express enough how passionate I am about the work being performed at this magical estate. In particular the Secret de Schistes – now in its 6th season – is what the young folks call “sick”! It absolutely screams SQN – FOR A PRICE THAT IS INSANELY CRIMINAL!

Interested in locating this dreamy wine, at the best price in the States? Let me know in the comments…