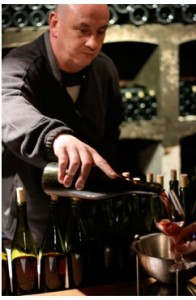 Another fine producer who was conspicuously absent at this year’s Grand Jours De Bourgogne; could it be that importers State-side are hoarding the fruits of their favorite producer’s labor away for their own pleasure? The absence of this perennial over-achiever certainly suggests such a possibility.

The original estate that would eventually become known as Domaine Jerome Chezeaux was formed in 1930 by Julien Missery through land acquisitions that spanned throughout top lieu dits in and around Nuits-Saint-Georges. The Missery lineage is well-known in the Cote D’Or – even today – as it has been linked to the eponymous Chateau, which is located some 15km west of Dijon, quietly nestled in the French countryside. Whether Julien – the ancestral forefather to today’s Chezeaux family – is related to those members of the Missery line is uncertain, yet it is certain that the Chezeaux’ have been in the Cote for quite some time.

Jerome took over the family estate upon his father’s untimely death in the early 1990s. Having studied at his father’s side – as well as having gained knowledge of the more modern school of viticulture via his studies at the “Lycee Viticole de Beaune” – Jerome was fully equipped for the role of vigneron of his family’s Domaine. And while Jerome fully realized the advancements available to him as had been put forward at university, he remained steadfast in his conviction to honor time tested and traditional methods of Burgundian wine-making.

Jerome’s approach to viticulture is summed up easily in a single phrase – as is the work of most of today’s greatest Burgundians: “non-interventionist”. Just as his father (Bernard) before him, Jerome believes in a strict adherence to a vineyard process known as lutte raisonnee. Succinctly described, this is the art of “struggling reasonably” or “fighting reasonably” within one’s own vineyard.

Towards the goal of reversing years of abuse to the soil as a result of the use of synthetic herbicides, pesticides and more, French vignerons have turned to a natural method of tending their vineyards that ensures a return to healthy, vibrant soils and crops. This use of natural ingredients, as well as the implementation of plowing as well as the planting of cover crops and more (such as introducing various biodiversities to one’s vineyard, etc.) is drastically improving the quality of not only France’s vineyards, but the complexities of the wines emanating from these healthier vineyards as well. Only when absolutely necessary do these practitioners of lutte raisonnee employ herbicides, etc. – and only to the very barest degrees necessary.

In addition to his natural practices in the vineyard, Jerome adheres to time-honored traditions in the cellar as well: wild yeasts, malolactic in barrel, limited new oak and never are the wines subjected to filtration.  These practices consistently garner critical acclaim, and have resulted in praise from the Wine Advocate to include, “…These are some of the most beautiful, classically built wines I tasted on my trip…” As for the newly released 2010s, critical acclaim is once again quite impressive, with scores ranging from 90-95 for each of their lieu dits. This is indeed a super-star Domaine!

For details on currently available offers from this estate, please visit: